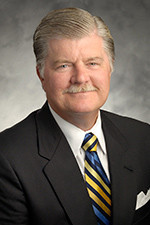 Bob lends his expertise to numerous commercial real estate specialties. He is instrumental in bringing business to Carter Godbout & Associates while being directly involved with commercial sales and leasing. He specializes in Tenant Representation of national, regional and local firms with an emphasis on office product for both professional and medical use.

Bob is a founding partner of Carter Godbout & Associates having previously served as Senior Vice President with Harvey Lindsay Commercial Real Estate from 1990 to 2013. Prior to that,  he was Vice President of Koger Properties Inc., a National Real Estate Development Firm  where he had been employed from 1972 to 1990. He has been married to his wife, Kathy, since 1968 and they reside in Princess Anne Hills in Virginia Beach.  Bob received his Bachelor of Arts degree from Georgia State University in 1969 and moved to Virginia Beach in 1974 to oversee the development, management and leasing of The Koger Center.

Bob has been recognized by many of the groups he has been involved with for his achievements and his service to the community. Some examples follow: